Every year, our students, partners, ambassadors and broader community put their energies behind National Road Safety Week to spread the messages.  Here’s how they’ve lent their support.

National Road Safety Weeks were held in New Zealand and Australia 9 – 15 May and 15-22 May respectively. Here’s how our community got involved.

Raising awareness at RYDA workshops
With the help of our corporate partners, we had fun promoting National Road Safety Week at our various RYDA workshops.  We shouted students to yellow cupcakes, had some photo ops with pledge signage and even, with the help of partner, Boral, gave them the opportunity to see the road from a whole new perspective.

During the pandemic, we took utmost care to ensure that our community remained safe.  Therefore, we were unable to participate in many of the activities we like to do to get our students, volunteers, partners and community involved in National Road Safety Week.  However, as we saw in the heart-breaking stories of continued loss and trauma on our roads during the pandemic, road safety remains of critical importance.  As restrictions eased and it became safe to connect again, we asked a special group of students to remind us why it is so important to provide the life-saving road safety messages of RYDA and why we must all play our part in creating safer roads.

National Road Safety Weeks were held in Australia and New Zealand from 6 – 12 May 2019 respectively. Here’s how our community got involved.

The Student’s Perspective
RSE’s major partner, Bridgestone, asked students from Southern Cross Campus College what they remember from the RYDA programme and what they would like to see happen during National Road Safety Week. Here’s what they had to say:

Raising awareness with our schools
Students who attend RYDA during Road Safety Week were asked to create a personalised number plate with their pledge to #DriveSoOthersSurvive . Our #speakup megaphones also gave them a handy way to get their road safety messages across. 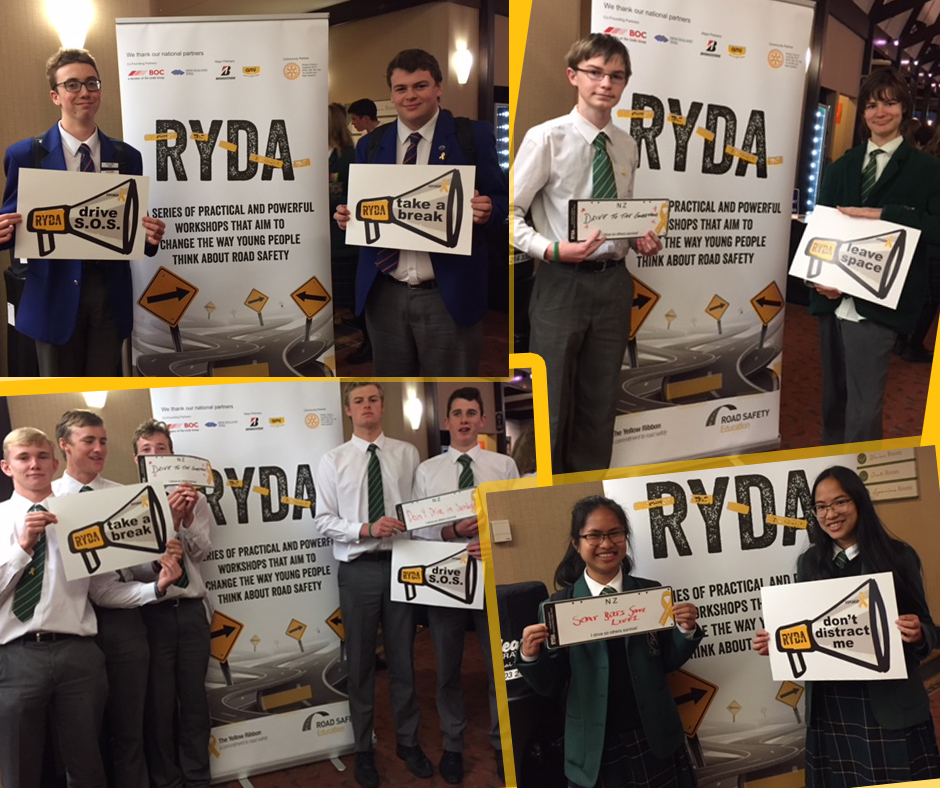 BOC set up a photo booth in the cafe and got some great participation from staff:

National Road Safety Weeks were held in Australia and New Zealand from 30 April – 6 May and 7 – 13 May 2018 respectively.  RSE got behind activities and themes in both countries.

In Australia the broad theme was #DriveSoOthersSurvive (with a special focus on vulnerable road users) while in NZ, we’ll focused on raising awareness of seat belts and distractions.

The symbol of Road Safety Week is the Yellow Ribbon and many States in Australia raised awareness by lighting iconic landmarks (including the Sydney Harbour Bridge and Melbourne’s Bolte Bridge) yellow.

RYDA provided the perfect backdrop for the ACT launch of National Road Safety week, officiated by Minister for Road Safety, The Hon Shane Rattenbury, MLA.  The ACT Government, who have provided generous funding to the RYDA program, further demonstrated their commitment to supporting youth road safety education and got a taste of what students experience when they witnessed a speed and stopping demonstration.  Also attending the launch were RYDA Ambassador-Advocate, Peter Frazer (SARAH Group), Rotary District 9710 Governor, Stephen Hill, RSE CEO, Terry Birss, CEO of RSE’s major partner, MTAA Super, Leeanne Turner, representatives from the Australian Federal Police and the ACT Department of Justice and Community Safety and students and teachers from Melba Copland Secondary School.

Raising Awareness with our Schools

Students who attended RYDA during Road Safety Week signed pledge boards and jumped in the ‘yellow’ photo booth for some pics to promote the messages of #DriveSoOthersSurvive #Belton #Phoneoff.  Selfie’s were being snapped and posted across Australia and New Zealand from Toowoomba in South Queensland to Auckland, NZ.

Raising Awareness with our Partners

Our corporate partners get right behind Road Safety Week, spreading the word among their staff with the distribution of yellow ribbons and pledge boards and ‘wear yellow to work’ days.  Keep checking back during the week to see our updated photo galleries as Corporates across Australia and New Zealand get behind the cause.

Working with some familiar faces

We are lucky to have the fantastic support of AMI Insurance as a major partner in New Zealand.  It’s great to have friends in high places, because AMI asked a few of their friends from the Canterbury Crusaders, who also happen to be members of the All Blacks, to come along and talk with RYDA students about road safety to raise awareness and shine a spotlight on road safety week. 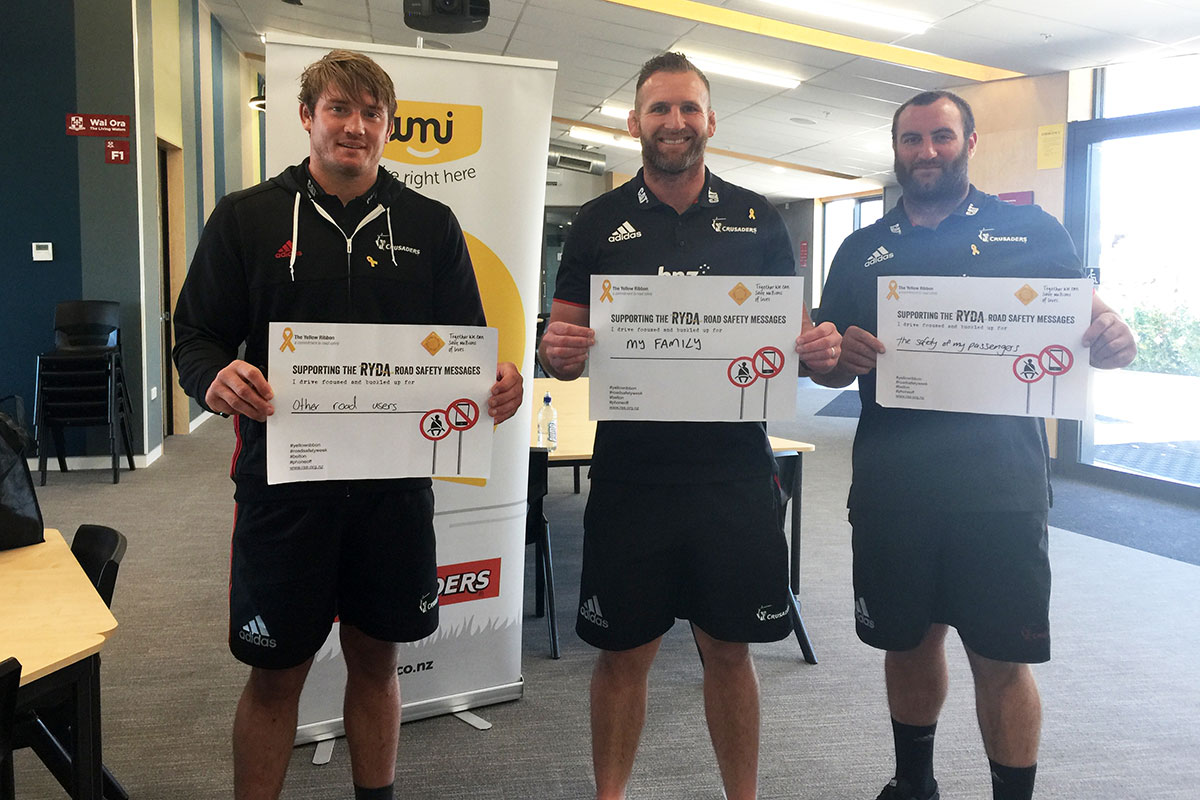 National Road Safety Week in Australia and New Zealand coincided with the Fourth United Nations Global Road Safety Week, held from 8-14 May 2017.  The week focused on speed management and what can be done to address this key risk factor for road traffic deaths and injuries.  It launched action through the ongoing campaign: Save Lives – #SlowDown.   You can find out more about the UN’s activities here.

Road Safety Weeks are held to support the UN’s Decade of Action for Road Safety (more on that below).

We took part in a number of activities during the week to raise awareness under the banner of the yellow ribbon: a symbol of a commitment to road safety.  Here’s what went on:

RSE’s new Ambassador, actor Andrew Morley, attended the RYDA Program in Lilydale, Victoria on Tuesday, 9 May.  After addressing the students, Andrew and the whole group took a photo holding 264 #slowdown signs, representing each young life lost on Australian roads last year.  Click on the images below to enlarge:

We celebrated the attendance of our 500,000th student at our Penrith venue on Wednesday, 10 May.  As part of the celebrations students took part in a short ceremony attended by the Hon Melinda Pavey (New South Wales Minister for Roads, Maritime and Freight), RSE Ambassador Peter Frazer (President, SARAH Group) and other special guests.  Students signed #slowdown pledges and unveiled a giant yellow ribbon.  Check out the galleries below:

Save Lives #SlowDown – Count me in!  Pledge gallery

Raising Awareness with our Corporate Partners

Our corporate partners got right behind Road Safety Week, spreading the word among their staff with the distribution of yellow ribbons, yellow hats and UN pledge boards.  As road safety week came to a close, our corporate partners reminded us that their support for road safety education and their work to reduce the road toll towards zero will continue.

Bridgestone put their creative hats on produced a community service announcement highlighting the issue of speed and the alarming rise in the youth road toll.

Taking part in other community initiatives

In Australia, we’re again supporting the great work of the SARAH Group who are leading the charge with National Road Safety Week (#NRSW).  The focus of the week is #stopdrivingblind.  It is a call to action for drivers and riders to i) eliminate/minimise in-vehicle/other distractions and ii) promote “active” responsibility for those on the road ahead.

The focus of the Road Safety Week is ‘Children’.  The UN have asked people from around the world to hold up a sign promoting their road safety message, take a selfie  and share it across social media with #savekidslives.   Some of our staff have already posted theirs.

We got to thinking… Who better to influence children than an older sibling, cousin, neighbour or school student?  So we are asking every student attending RYDA during Road Safety Week to name a younger friend or relative to be their ‘pay it forward’ beneficiary of a road safety message – making use of the UN #SaveKidsLives poster, each student will write the selected person’s name on the poster, take a selfie and post to social media using #savekidslives, #safie, #ryda, #payitfoward.  You don’t have to be at a RYDA program to take up the initiative – upload your commitment today.

Further details on the United Nations campaign are available at:   http://www.savekidslives2015.org/

I would like to convey just how worthwhile the day was.  It had students buzzing for weeks.  All students, without exception, got a lot of practical and useful information from the different sessions and were quick to talk to their teachers, family and fellow students about what they had experienced.